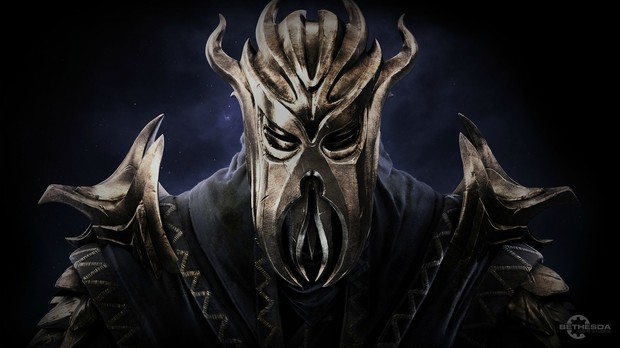 The next DLC will be called Dragonborn and it will be set on the island of Solstheim.
The main locations you will be able to visit are Raven Rock, Miraak Temple, Castle Karstaag and a Telvanni tower (N.B.: Not the Telvanni Tower seen in Morrowind in Vivec, but one like this).
There will be some new armor types, Bonemold, Chitin, Nordic and Stalhrim each having heavy and light classifications.
Out of these new materials, you will be able to craft new types items out of two of them, namely Stalhrim and Nordic.
Spears will be added along with an array of new creatures/automotons, Riekling, Scrib, Netch, Boar, Benthic Lurker, Ballista Centurion, and something with an internal name of HMDaedra, quite possibly referring to Hermaeus Mora since it lists his plane of oblivion, Apocrypha. You will also be able to ride dragons and be in combat while mounted on one.
This is what the quest header for Dragonborn Quests will look like, and this is what the compass markers look like for the new locations.
From the top, clockwise: Telvanni Tower, To Solstheim, Raven Rock, Castle Karstaag, Standing Stones, To Skyrim, Miraak Temple.
There will be at least two new tracked stats: Dragonborn Quests Completed, and Stalhrim Items Crafted
You will travel to Solstheim via a boat, much like you did in Bloodmoon, although this time, it looks like you may at least get a partial visual boat ride.
The Telvanni tower has float up and down animations, so no levitation it seems.
Dragon riding will take place in its own world space
Mounted combat looks like it's getting an improvement with the ability to cast spells while mounted, tihs isn't necessarily a Dragonborn only thing though!
It appears that Update 1.8 readies Skyrim for PS3 DLC.