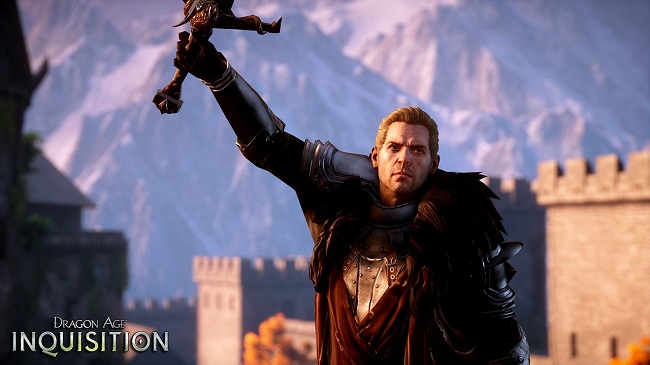 1)I'm disappointed in this game so much. The hole DAI feels like it`s an single-player MMORPG with little to show for.

So let`s start the review. Graphics look bad and every character looks like it`s covered in plastic. Story is lacking contekst and characters have vary little development + your choices have little impact on the world. Combat is fun at starts but it gets boring quickly and the animations look like they are from 2004 :/.

After all my time spend with Dragon Age I. There is nothing new to show or experience. I`m giving this game a 4 for the amount of content that it has via side quest`s and more.

2)This Frankenstein's monster of a game doesn't deserve a long review so I'll be extra quick.

Story? Calling it a brainfart is being generous (particularly because it’s a direct copypaste from TES4). Your choices from previous games? They don’t mean squat. Yeah, the Keep is just a form of copy protection and nothing else. But to be fair the choices you make in DAI don’t change anything either. Dialogues? Written by a bunch of illiterate morons. Combat system? Designed for consoles, ‘nuff said. Keyboard+mouse option was a last minute addition so on PC controls are awkward as hell. Graphics? They spent truckloads of money on it but most of the character models are nauseatingly ugly and animations are even worse. Performance? One word: stutter. Adding insult to injury on PC the game is encumbered with three different kinds of DRM - Origin, Denuva and the Keep - all at once.

They wanted to make Dragon Age: Skyrim and ended up with Dragon Age: Oblivion. And when I say "Oblivion" believe me I mean it. I hope Bethesda will sue them for such blatant plagiarism.

DAI is so terrible it makes ME3 look good. But the hype train of paid ads poorly disguised as "professional" reviews has been going at full speed for months so I'm sure they'll post record sales numbers soon enough.

3)This game is a joke, how can games made more than 10 years ago look better than a modern AAA game, also play better?
Seriously, the game has no facial animations, only blinking and mouth movement, textures are a blurry mess, the writing is worse than fan fiction, there is no challenge, you can't import your saves if you don't have an internet connection to make a save file in EA's stupid website.
Not to mention most of your choices have been retconned because BioWare felt like it.
This game is a joke, a very bad one, this is honestly worse than Dragon Age II, I didn't think that was possible.

4)*Update on my previous review

So I gave this game a second chance and put in another 4-5 hours and it is .....just terrible. I have never felt the need to create an account just to give a game a review but this game... it's like Ebola combined with aids, its that bad. Skyrim wannabe but a lot worse. I mean its not engaging at all nor fun, it's simply boooooring and terrible.

5)I will weigh in on Dragon Age Inquisition with my two cents. This game is a five year venture that should have been released 10 years ago. It is without a doubt one of the worst games I have ever had the displeasure of playing. The story is overly scripted throughout a boring non-open world while the combat is a clunky button mashing fest. In addition, the camera angles are horrendously flawed. The only plus, in my opinion, is the facial recognition of the characters. I honestly wanted my money back after all the false hype created by the cronie reviewers and the developer. It is a true snorefest that makes Elder Scrolls look refreshing. I jumped back into gaming only to make a quick exit after this disappointing title. Stay away unless you're a devout follower or enjoy wasting your hard earned cash. Period

6)They pulled a total Kingdoms of Amalur on this one. It was originally designed to be an MMO... and it shows.

If you were hoping for something like Dragon Age: Origins, this is not that game. It bastardizes a lot of it by dumbing down the tactics, skill tree/attributes (you can't even assign your stats anymore).

P.S. If you love oily, grease drenched hair, then you are in for a graphical delight my friend

7)Absolutely horrendous.
First of the animations are absolutely terrible, you have head turns which look a epileptic being exposed to strobe lights.
Graphical clipping everywhere, the textures are terrible almost none of them are more then 720.
The writing is abysmal and reminds me much of Twilight, or 50 shades of grey with its unabashed corniness and focus on characters sexuality instead of their personality.
The combat is depressing with no auto-attack and shallow generic abilities combat just ends up being me bashing buttons with very little strategic thought other then to stun enemies periodically.
I'm surprised anyone buys anything from EA, anymore.

8)Combat and facial animations are poor, the writing and voice acting is even worse than it was in Dragon Age II and the combat feels awkward thanks to the horrible AI of your enemies coupled with bad animations. Add to that the fact that the game is full of poorly hidden misguided social commentary and political propaganda that should have no place in a videogame. Bioware has not released a decent game since Dragon Age: Origins and this game is no exception. I recommend you all save your money and don't waste it on this horrible excuse for a game.

9)If you thought part 2 was bad, This one is a second helping of the same garbage.
Lack of proper medieval etiquette, unrealistic flat personalities made by fan-dom tier hack writers, copied a lot features from skyrim, and everyone looks like men.